So there we were. Arthur went through a lot at the beginning of his life. He had rotavirus, norovirus twice and bronchiolitis leading to a hospital admission. Every time he got ill my anxiety would go through the roof and I would often feel very low in mood. I feel like we battled a lot and if we hadn’t of faced everything that we did we might have got home sooner and I might have been in recovery sooner. But what matters is that we’re here now. But for now let me tell you why I think we should always trust our instincts…

I remember when Arthur first got rotavirus. He was pooing every hour. I knew straight away something wasn’t right. He pooed about 3-4 times in the day and maybe once or twice in the evening but the first day he just could not stop. I remember telling them on the unit and they suggested they would have a look next time he went. So they looked and said it looked really normal for a breastfeed baby. They said how often babies could poo once a week one week and then several times a day the next week. Something still didn’t feel right but we carried on. He seemed well in himself and was still feeding, nothing else was out of the ordinary. The next day, the pooping seemed to of died down a little, however a member of staff asked if they could take a poo sample next time which of course I agreed too. They said they just wanted to check. Then somebody else said they didn’t need too. So they didn’t.

A couple of days passed and he was still pooing more than usual and I flagged it up again, my gut instinct was telling me something wasn’t quite right and I became very worried that he would become dehydrated and start loosing weight. Eventually they approached me and took a poo sample which I happily gave, the next day it came back as positive for rotavirus and Arthur had to be put in isolation. When you suffer from anxiety I think at times it can be hard to see what is a real worry and what is not. I know sometimes it can manifest itself convincing you there is something wrong when there isn’t. But I think we should always trust our instincts. Whether your a parent or not.

Unfortunately Arthur became quite unwell with rotavirus and began vomiting and not wanting to feed much. I remember I started to cry late one night and couldn’t sleep because he kept vomiting. I was convinced he was going to choke whilst he was sleeping. I felt like I had to watch him all night which I know was not rational but at that time I couldn’t think rationally. Immediately I thought of the worst case scenario and was convinced I was going to lose him. It was a horrible time and I had to do a lot of talking through it. That’s what anxiety does, it creates a tornado inside your head, it’s exhausting.

Thankfully we got through it. Our next big battle was bronchiolitis. Watching you baby struggle to breathe is the hardest, most horrible thing. Breathing is something we all do, for most of us it’s not hard, it’s easy. When your tiny baby is using all their strength and muscles just to breathe, words can’t describe it. Arthur started with a cold and the cough gradually got worse. Then he started to struggle to breathe, he was really working hard with every breath. I told them I was concerned and we went to A&E. His respiratory rate and his pulse was up and you could see how hard he was working to breathe. They diagnosed him with Bronchiolitis but said because his oxygen levels were okay and he was still feeding we could go back to the unit but we could return if we were concerned again.

I will never forget what happened next. When we got back to the unit he was exhausted, we put him to sleep and me and Jord both closed our eyes too. Arthur was making a lot of noise when he was breathing but suddenly it went quiet. Me and Jord both realised at the same time, we looked at each other and both jumped up, we rushed over to him, Jord put his hand on Arthur and he gasped and starting breathing again. That moment will always haunt me. Words cannot describe how scared we both were. I barely slept that night, constantly watching him, terrified it would happen again, thankfully it didn’t.

Arthur did however continue to get worse. He didn’t want to feed, he was fighting really hard and I knew people thought it was my anxiety that was making the situation seem worse that what it was. However I decided we needed to back to hospital, this was the third time. When we got there, Arthur’s respiratory rate was high, his pulse was 190-200, and his oxygen level was 84%. They gave him oxygen and it gradually went up to around 92%. We would have to stay in hospital. I was relieved that they were finally doing something because all that time I felt hopeless just watching him struggle, but I was also heartbroken that he was in this situation in the first place. 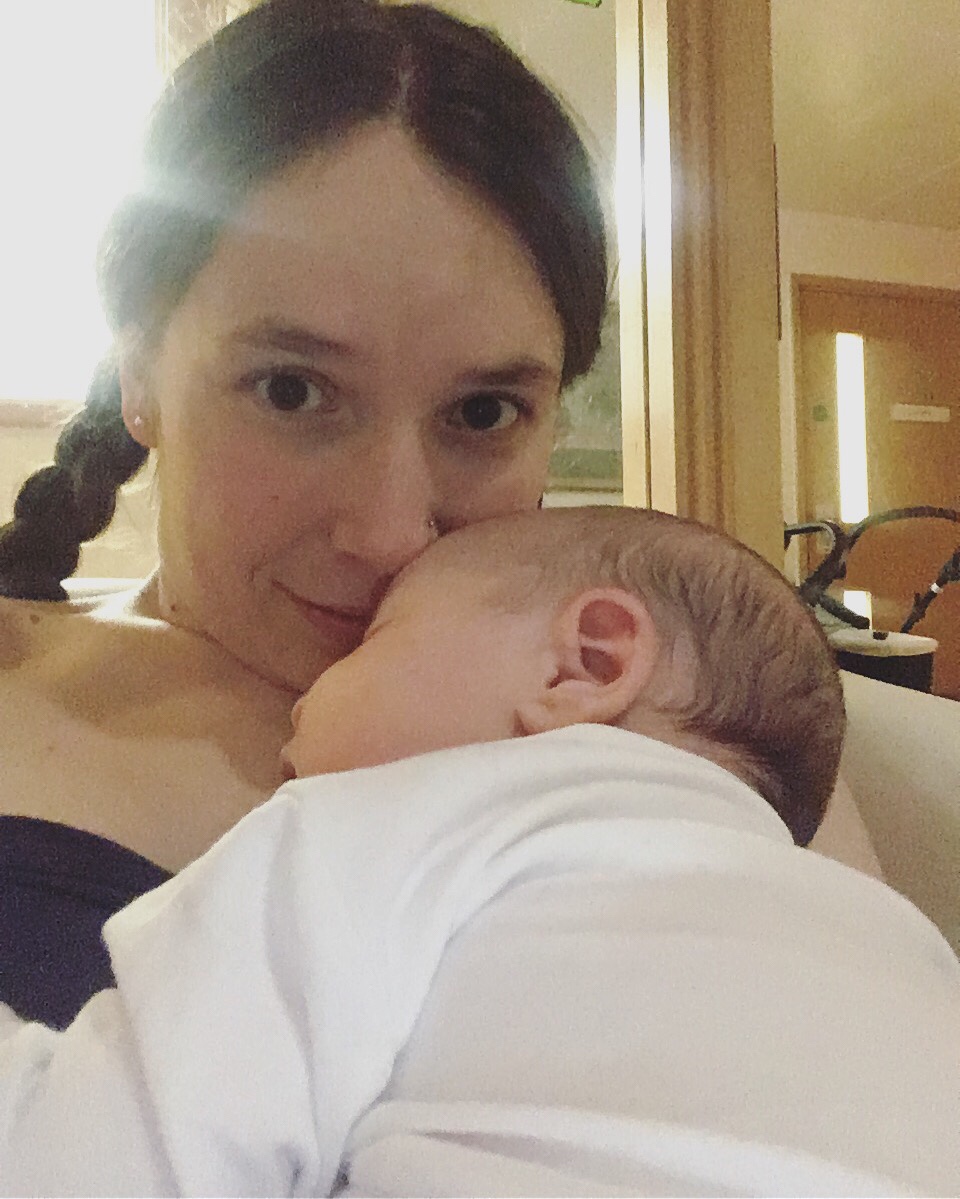 All the things he has faced he has fought so hard. But I remember feeling so angry. I felt like I was being punished for something. My little boy, who had barely been in the world had already faced so much that he shouldn’t have and I didn’t I understand why?! It didn’t seem fair. I blamed myself. Part of me still does. But I know now that young babies do get ill. Their little immune systems are still growing. I remember looking at him in his massive cot in the hospital just wishing that he didn’t have to go through anything else. I would have done anything to take his place. For the first two days I didn’t even hold him, he had no physical strength left and he would just lie in his cot, tilted upright to feed and then he would just fall straight back to sleep. It was heartbreaking. But once again I was in awe of how strong he was. How brave he was.

When he was discharged from hospital we were so happy. He was so much better. However as the evening went on I became more and more anxious. I realised we went in the hospital with all the nurses and doctors. There wasn’t the equipment we needed there if something went wrong. It came to the night time and I couldn’t put him down. Convinced he was going to stop breathing if I did, I explained I was never putting him down. Something that was impossible but I just couldn’t face it. I was crying and so scared that I couldn’t think rationally. My anxiety was rearing it’s ugly head once again. It was consuming me. With the help of the staff and Jord I managed to calm down. It took time but eventually I put Arthur down. Day by day he improved and got through it.

My anxiety heightened moments of these bad situations. But I knew something wasn’t right with our boy. I knew he was going to need a little bit of help to get through this and I am so glad I trusted my instincts with the bronchiolitis and kept going back to hospital. I am a nurse but I’m an adult nurse. I don’t know babies, but I know my son. Trust that you know your babies and children. If your pregnant and worried about telling your midwife something, trust you know your body, and you know your unborn child.

Even if your not a parent or a parent to be, trust yourself, trust your instincts, go with your gut.

Stay tuned for next time peeps.

So here I am. I am 24 year old originally from the Isle of Wight, where my amazing family still live. Mother to a little man called Arthur. Partner to Jordan. Nurse, friend, daughter. After having my little man I developed post-natal depression and anxiety. It was a very dark time in my life. I wanted to start this blog as an honest telling of my story and our future adventures. My goal is to tell the reality of motherhood, mental health and everything in between. I would love to help others with my story. Even if I help one person in the whole world I will have achieved something. Here there will be posts about explosive poos, travelling with a baby, tales of sleepless nights. But there will also be very honest tales of my mental health journey, where you can go for help, and the incredible people who helped me along the way. I'll show you my family, friends and my amazing partner Jordan. It will be a little snippet into my world. Please bare with me, I've never done this before, I'm not a write and I don't pretend to be. I'm a Mama, telling our story. You are welcome to come along for the ride. So here we are. Love Kate x View all posts by sohereweare